Day 6 has probably been my favorite of all the daytime excursions so far.

First stop of our day was at Bro Boru Heritage Center, a small museum focused on promoting traditional Irish music and dance. In the summer, they apparently have performance 5 nights/week, but we were a bit too early in the calendar year. Still, we got to see replicas of ancient Celtic instruments, watch videos of dance styles through the centuries and read about very old poetry styles.

I was especially interested in the mythology surrounding yew trees, which I’ve made note of to research later, hoping that they may feature in some new story.

After exploring the center, we headed over to the Rock of Cashel, a medieval fortress/ holy site, where the OPW does 45-min guided tours. It was slightly less busy than most of the other places we’ve been so far (in part, I suspect, because of a threatening rainstorm). 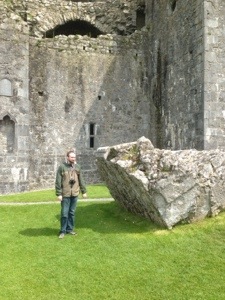 Kyle at The Rock of Cashel, next to a blown off “bit”.

A (creepy-ish) angel in the restored hall of the vicars choral.

An abbey ruin in the middle of a working farm’s pasture. 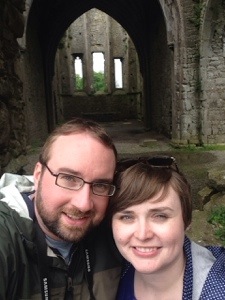 Squinty selfies inside the abbey. It was bright!

Lunch at Granny’s Kitchen. A simple, light meal before the short trek home.