As I write this, Kyle has just landed in New York, and our days of being footloose and fancy free in Utah are over. Bootcamp starts in 3.5 hrs for me and work in even less time for him.

We took yesterday a little bit easier than the other two days, but we still did a lot. And had a really grand time.

After a quick swim in the hotel pool and breakfast, we headed out around 9a for a scenic Sunday drive. Extra appropriate around here because NOTHING IS OPEN ON SUNDAYS. Seriously. Nothing.

We took the Alpine Loop Scenic Byway/Backway and it was gorgeous. Breathtaking. We took a lot of pictures (as you’re about to see). We made a lot of stops and intended to go on a long hike at the end of which there is a huge cave with tours, but the timing didn’t work out, so we moved along. 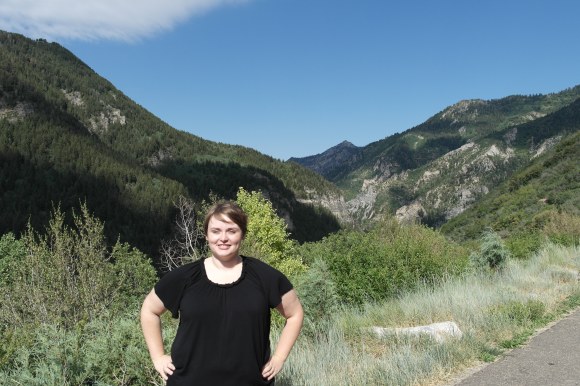 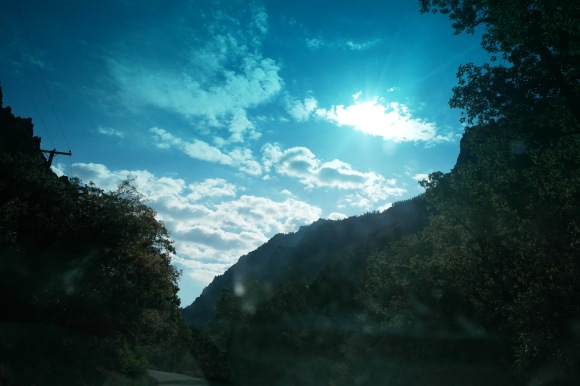 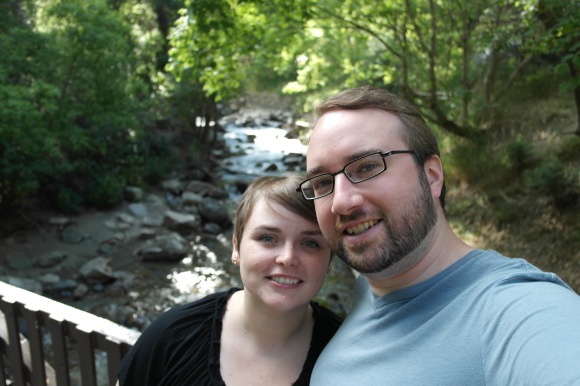 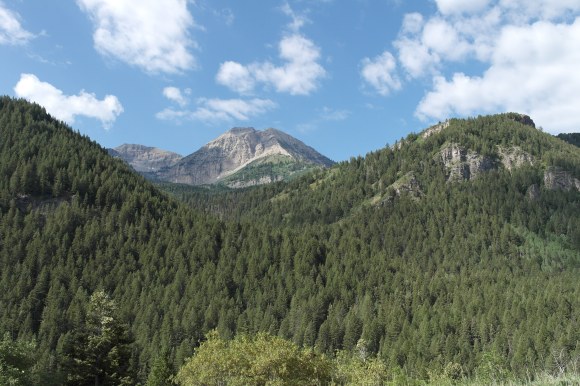 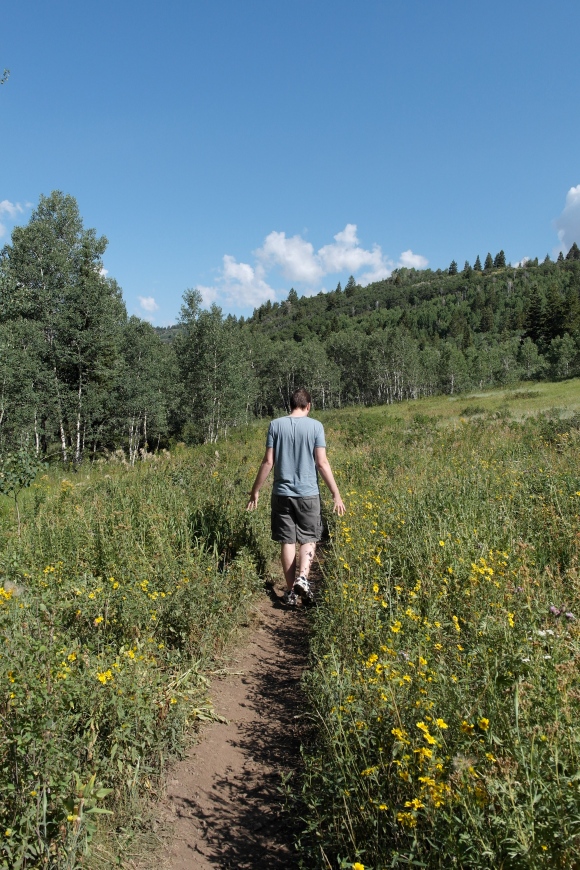 At the very end of the drive was Sundance (apparently a ski resort and also where the Sundance Film Festival is held). They have their ski lift going in the summer and we decided to take it up the mountain.

The camera died halfway there (of course) so I don’t have many pictures of it all, but it was like an really slow and not very steady half-hour long rollercoaster. You’re really high. Apparently they also do full moon nighttime rides. If you live in/near Utah, I am jealous that you can go on one of these. If you don’t go, you’re very silly. (Unless you have a fear of heights or questionably safe guard rails. Then you’re smarter than I am.) 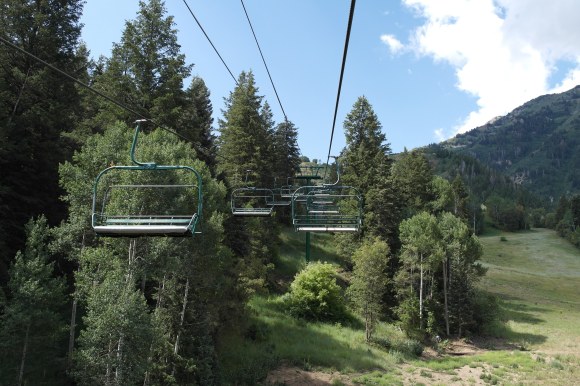 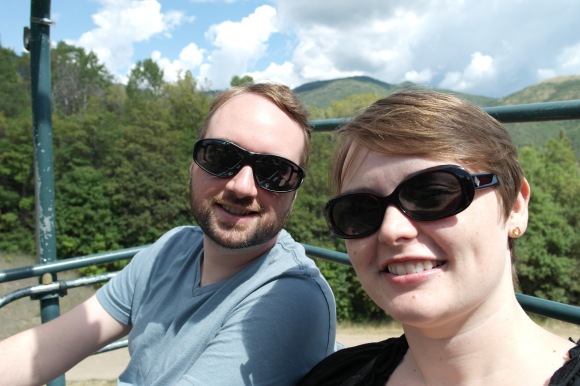 Our morning full of driving adventures, we went hunting for lunch. And hunting it took. As I mentioned above, there was nothing open. Nothing. We eventually found a SmashBurger (a chain similar to 5 Guys or Bobby Flay’s). It was good. Not terribly earth shattering, but good.

We took quick naps in the afternoon, trying to get me on the later schedule and Kyle ready for his late-night flight. It worked a bit. I slept until 5a (instead of 4a).

After nap-time we headed down to a little local art museum and crashed a massive birthday party. Really, we were only there to see an exhibit of local quilters’ work, but I’m fairly certain we were the only people there that were not guests of Phyllis’. The quilts were pretty, though I was sad there were hardly any hand quilted works. I mean, I get it. It’s a ton of work and they can do such pretty things on the machines, but I don’t think there were any.

Still the piecework was often gorgeous. 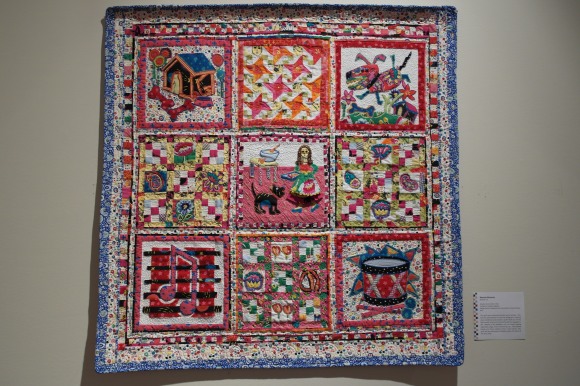 This one was a commissioned work by a woman who had saved all of her daughter’s baby clothes. It’ll be given to her daughter on the upcoming birth of her child. An awesome sentiment, and what a great quilt to have! 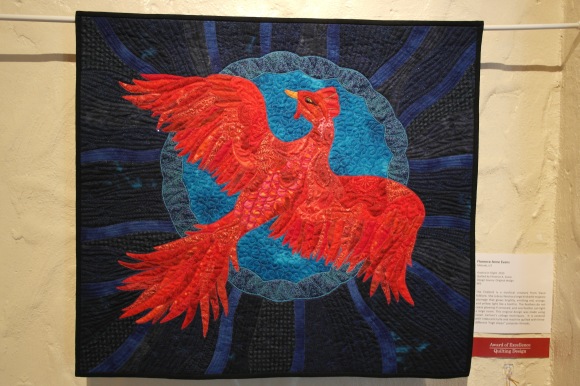 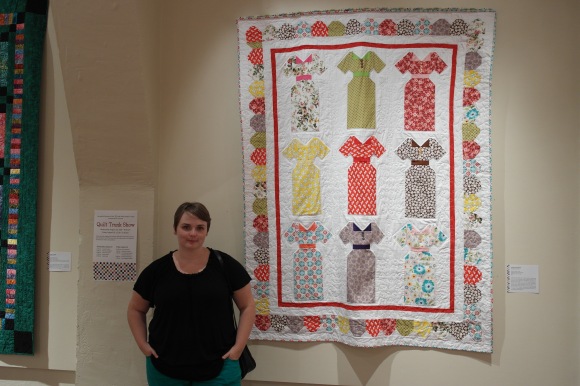 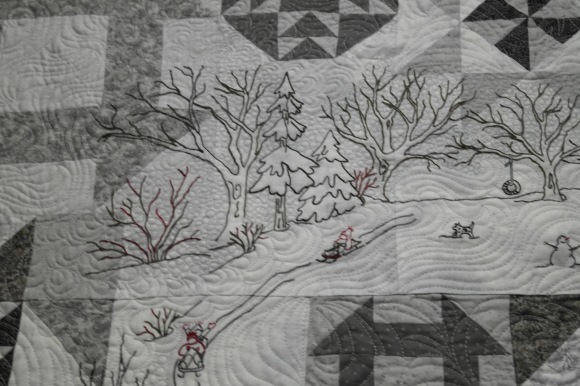 Also: bonus! There were great found object statues throughout the museum and a garden with “regular” statues. I’m fairly certain if we had more of a disposable income at our, well, disposal, we would totally be the proud owners of a little pieced together metal statue. 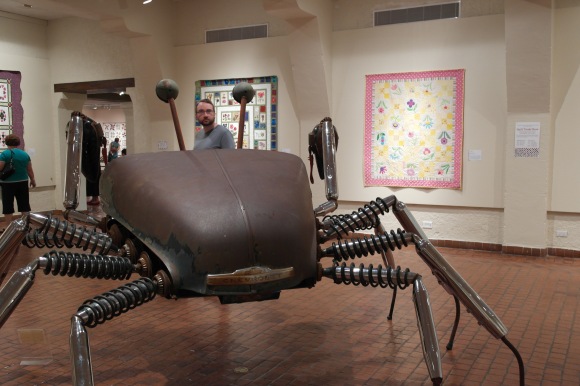 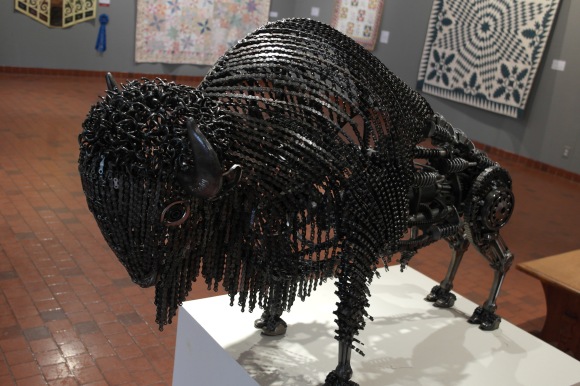 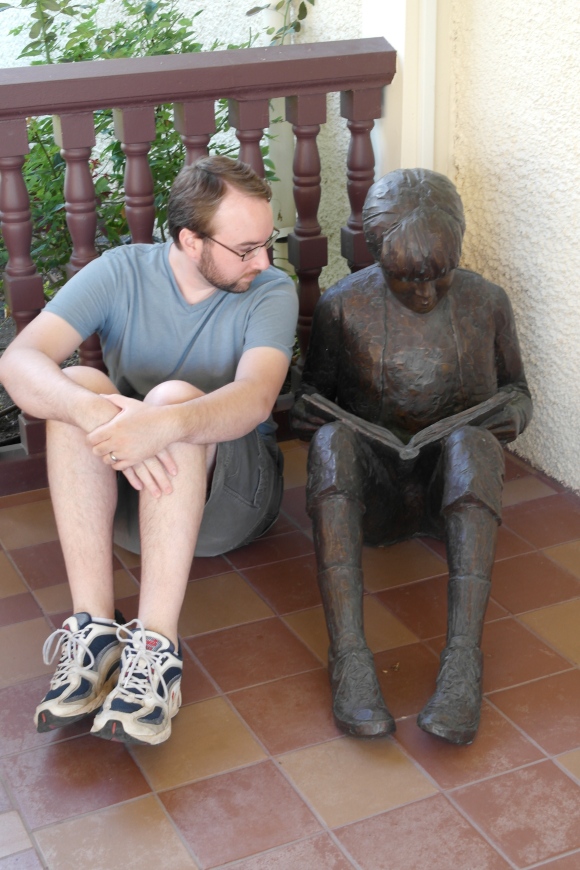 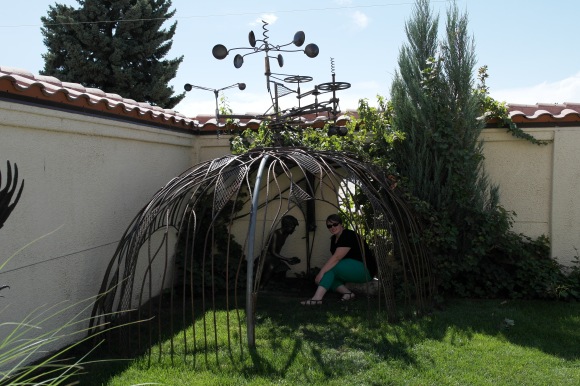 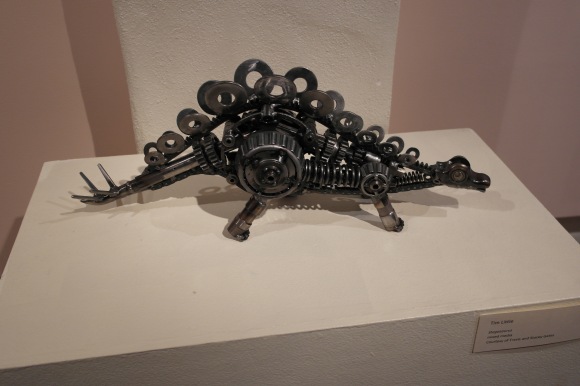 After the quilt show we had a few hours to kill and I was getting nervous, so we went to a movie. We saw the Wolverine flick, which was good enough. It did the job of keeping me distracted and it had A  LOT of gratuitous half-naked Hugh Jackman which was pleasant. Mostly I liked the theatre. Our tickets were super cheap, our seats were assigned and they had a crazy computerized candy machine.

Needless to say we had popcorn, RootBeer and chewy SweetTarts for dinner.

And finally, finally we came back to the hotel.

My stomach was in knots and the butterflies were dancing some sort of killing dance on top of them.

Kathleen, OSC’s awesome assistant, was in the lobby and I had to check in. It was completely…uneventful. I said my name, she handed me a packet of info and asked if I had any questions. All of the questions I’d had swirling around in my head all morning disappeared. I blew fish kisses at her, not coming up with anything, squeaked a “no” and walked away. It was awkward, you can ask Kyle. He witnessed it.

We headed up to the room, got him packed up and made a quick trip to WalMart for foodstuffs for me for the week. Unlike Kyle, I cannot live on Wendy’s across the parking lot alone, so instead I have soup and lunchmeat. I plan to supplement with yogurts and other easily steal-able things from the morning’s breakfast buffet.

And then he headed out to the airport and his overnight flight back east. Our adventures are over and now my work begins.

About a month ago I received a very nice surprise in my inbox: an email from Orson Scott Card’s assistant informing me that I had been accepted into Uncle Orson’s Literary Boot Camp this summer. I will spare you the details of what happened next because they are not exactly flattering. Suffice it to say that after some celebration I accepted my spot and secured it with a decent chunk of change.

The timing is perfect–it’s the week before I go back on contract, and I found out the news immediately after receiving the balance of a design fee for an extra gig that almost killed me this spring. That extra work is paying for the entire experience which keeps us from having to nickel and dime daily life for the next 6 months.

Over the last few weeks I’ve made plans, secured a hotel room and booked flights (plural because Kyle’s coming out with me the weekend before so we can go esplorin’– I’ve never really been out west!).  I’ve read lot of alumnus(ae)’s blogs about their experiences and, while it’s not a direct preparation because I will take none of it with me, I’ve been using my summer to write like crazy.

I hadn’t said anything publicly about any of this because…well…I don’t really know. Part of me was afraid they’d gotten the wrong girl? Maybe people would find it strange that a costume professional who’s actually making it also wants to be a writer? That one professor from my early college years will be right and I have no real talent and you’ll all want to know how it went after I’m done and it will have been awful, awful, awful? Whatever the specific reason: it was fear based. I was scared.

But you can’t move forward if you’re consumed with terror, and I’m not interested in spinning my wheels. So here it is again:

I am one of 12 (or so) writers who made it into Orson Scott Card’s Literary Boot Camp. I am proud and amazed the first page of my little story showed enough promise to get me through those doors. I am also incredibly grateful that I get to participate in such a cool workshop. It’s going to be a long, exhausting, emotional week, but I’ll be ready. Those Midwestern farmer and manufacturer genes are good for something– I’ve never been afraid of a lot of hard work.

For a description of what I’m about to go through you can check out the official page, or do some google research. There are many amazing authors who have been through the whole process before.

I just submitted a very short story to a blog. I really, really like the super short format, it’s only about 150 words long. I think it allows (forces?) people to write with mystery and brevity. I think mine is good, but still my stomach churns and gurgles at the thought of rejection. You would think as my adult life has been spent in theatre, which is full of rejection, I would be a little more immune to the fear, but so far, I have not.

Ah, well. As they say: nothing risked, nothing gained.