Sometimes, despite my best efforts, words fail me. I can’t figure out how to express exactly what I mean. I can’t make my description match the image I have in my head. Or I don’t know for certain that the terms someone else is using are the same words I would use.

Today’s example: panniers. A good friend called and asked me to dig through our costume storage for a set she knew we owned. The theatre she’s working for this summer needs to rent them but our shop manager isn’t in town. The panniers were from a specific show, but it happened before my time at this theatre so I didn’t know them. They were worn by a specific actress, but the only set I found didn’t have any sort of label. She described them as “oversized,” which I took to mean gigantic. Like, go through the door sideways, if they were strong enough you could carry a friend around on either side of you, HUGE.

And the set I found I described as large, but not necessarily oversized. They weren’t from the beginning of the trend when panniers were used just to emphasize the size of hips (and therefore minimize the waist), but they weren’t colossal, some costume designer’s bizarre interpretation of 18th century opulence.

And so I abandoned all of my words and took this (very lovely) picture of myself wearing the panniers and sent it to my friend: 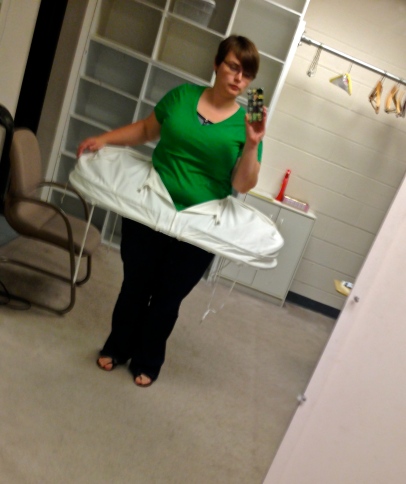 Because sometimes you just have to play dress up.

And wouldn’t you know? They were the right ones.